By: admin
In: Beauty
With: 0 Comments

There is no denying the fact that Sonam Kapoor is Bollywood’s OG fashionista. From her outfits to hair and makeup looks, she is one actress who has never shied away from experimenting. Be it a simple no-makeup-makeup look or full-on glam makeup, Sonam also manages to set beauty goals every time she makes an appearance.

In a recently launched series called ‘Vanity Vignettes’ on her Instagram page, Sonam generously revealed some of her best-kept beauty secrets and makeup hacks. If you’ve ever wondered how Sonam manages to look so spot-on each and every time, then you’re in for a total treat!

Sonam revealed in the video that even though nude lip colours are amazing, she absolutely cannot do without red lipstick. She feels that a good red lipstick is as good as neutral for her because it can be paired with just about anything. We couldn’t agree more. 02. She uses orange corrector to hide her dark circles

The actress has always been comfortable in bare, no-makeup skin, but has also spoken several times about her struggle with dark circles. She easily corrects this issue by using an orange corrector. This is what gives her under eyes that beautiful airbrushed finish. Simply apply and blend a small amount and then follow it up with your concealer for a totally flawless base. 03. She customises her foundation shade

If you feel like you’re the only one who is never able to find the perfect foundation match for your skin tone, then you’ll be glad to know that Sonam Kapoor is no different. The actress revealed that she prefers to mix three different foundation shades to be able to achieve the perfect match for her skin. 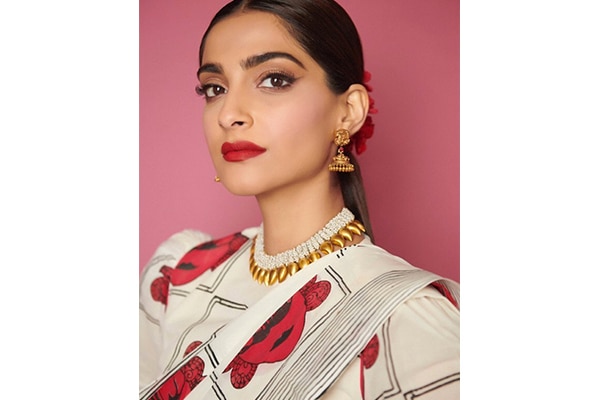 04. She always highlights her eyes

If you’ve ever scrolled through Sonam’s Instagram page, you’d very well know that the actress loves experimenting with her eye makeup. Sonam revealed in the video that she loves her big eyes and feels that they are her best feature, which is why she prefers highlighting them every opportunity she gets. She says that as an Indian girl, she is obsessed with doing up her eyes and highlighting them makes her feel instantly beautiful.

05. She loves experimenting with makeup

This doesn’t come as much of a surprise, TBH. But Sonam also happened to mention in the video that she loves everything related to beauty and makeup. She doesn’t stick to just one thing and loves experimenting with new styles and products. Though she did very clearly mention that nothing beats her love for the good ol’ red lip and that it is her absolute favourite go-to look. 06. She cleans her brushes religiously

For all you lazy girls out there who rarely clean their makeup brushes, take cues from Sonam. The actress says that even though she cleans her makeup brushes every four days without fail, it’s not enough for her. After every use, she spritzes some antibacterial spray onto her brushes and then wipes them clean with a tissue to get rid of the residual makeup.